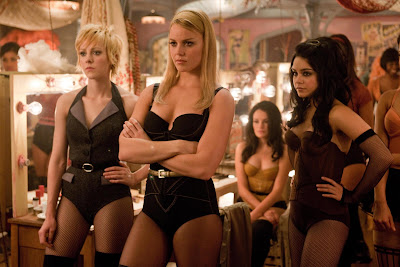 "Sucker Punch," the much-anticipated new film from Zack Snyder, director of "300" and "Watchmen," got its clock cleaned at the box office this past weekend by a real underdog.

From Brandon Gray's analysis at BoxOfficeMojo.com:

"Sucker Punch" may not have seen it coming, but "Diary of a Wimpy Kid: Rodrick Rules" packed more wallop than the hyped action movie in their debuts. Overall business was down six percent from the same weekend last year, when "How to Train Your Dragon" led.

"Diary of a Wimpy Kid: Rodrick Rules" bagged $23.8 million on close to 4,000 screens at 3,167 locations, boasting a brawnier start than its predecessor. The first "Diary of a Wimpy Kid" drew $22.1 million on around 3,400 screens at 3,077 locations in its first weekend last March, which led to a $64 million final gross. Striking while the iron was hot seems to have helped the sequel, which was all the more impressive considering the historic difficulty in maintaining momentum for kids franchises. Distributor 20th Century Fox's exit polling indicated that 51 percent of Rodrick Rules' audience was male and 59 percent was under 25 years old, which was nearly the same as the first movie.

Striking approximately 3,900 screens at 3,033 locations, "Sucker Punch" mustered $19.1 million, which included around $4 million at 229 IMAX venues (representing a record share for regular IMAX at 21 percent). That was a tad behind "Kick-Ass's" opening last Spring but much greater than the debuts of "Scott Pilgrim vs. the World" and "Jennifer's Body." However, it was no match for the "Kill Bill" and "Resident Evil" movies among other comparable titles, and, for all its hype, it was barely average for an action heroine movie. It was also director Zack Snyder's worst live-action start yet, following "300," "Watchmen" and "Dawn of the Dead."

"Sucker Punch" succumbed to style and spectacle over substance: it was marketed as a video-game-like blur of random fantastical action bordering on sensory overload. One of the few clear things in the ads was that all the action was going on inside the head of an institutionalized girl, so it was yet another wannabe mindbender. Divorced from reality, it seemed to have low dramatic stakes. A lack of characterization (posters don't cut it) was further reason for people not to care. Considering this was largely a fanboy affair, business could have been worse. Distributor Warner Bros.' research showed that 64 percent of the audience was male and 74 percent was under 35 years old.

Posted by TONY PHYRILLAS at 6:17 PM