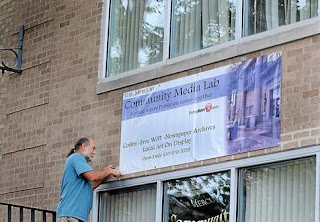 Pottstown, Pa., will be host of what could be a big part of the future of journalism: a Community Media Lab.

The Mercury will hold a grand opening Friday for the Community Media Lab, a first for Pennsylvania and one of the first-of-its-kind facilities in the entire nation.

The public is invited to attend the grand opening between 10:30 a.m. and 1:30 p.m. at The Mercury, which is located at the intersection of Hanover and King streets in Pottstown.

From a Mercury article announcing the event:

It will offer public access to newspaper archives, free Wi-Fi and use of computers in a coffeehouse atmosphere.

“The Community Media Lab is an extension of an initiative we started two years ago with our Town Square blogging network, and with this joint opening, it now involves downtown business,” she said.

Posted by TONY PHYRILLAS at 3:36 PM