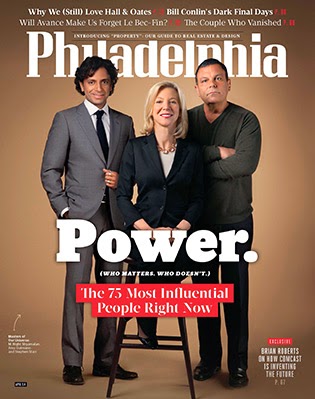 Since then, he has made four of the worst movies of all time: "Lady in the Water" in 2006, "The Happening" in 2008, "The Last Airbender" in 2010 and "After Earth" in 2013. Not only have the last four movies been critical failures, but they've also bombed at the box office. The trend is clear and it's been downhill for the Philadelphia-area director over past decade.

So why would Philadelphia Magazine put the director/writer on its most recent cover, which it dubbed the "power issue" along with several other prominent Philadelphia-area power brokers? It appears the editors of the magazine are stuck in 1999. If the guy can't sell tickets to his movies, what makes the editors think he's going to sell magazines? Not only has Shyamalan's influence declined rapidly in Hollywood, but another clunker at the box-office and he might be filming infomercials in the near future.

I point to an article by Kyle Buchanan about Shymalan's rapid decline as a filmmaker:


Ten years ago, M. Night Shyamalan was on top of the world, touted as “the next Spielberg” by Newsweek and fresh off a string of successes including the Oscar-nominated smash The Sixth Sense, the Bruce Willis superhero origin story Unbreakable, and the alien thriller Signs, which would be Mel Gibson’s last studio hit. But things have changed: The filmmaker who could once open a movie on his moniker alone has a new film coming out today, the sci-fi story After Earth, where his name doesn’t appear in the key marketing materials at all. It’s only the latest setback for Shyamalan, whose career woes have been compounded by giddy press reports chronicling his fall from grace, including a memorable round of media attention in 2010 when audiences supposedly booed his title card in the trailer for the horror film Devil, which Shyamalan produced. Where did it all go wrong?

Posted by TONY PHYRILLAS at 2:10 PM